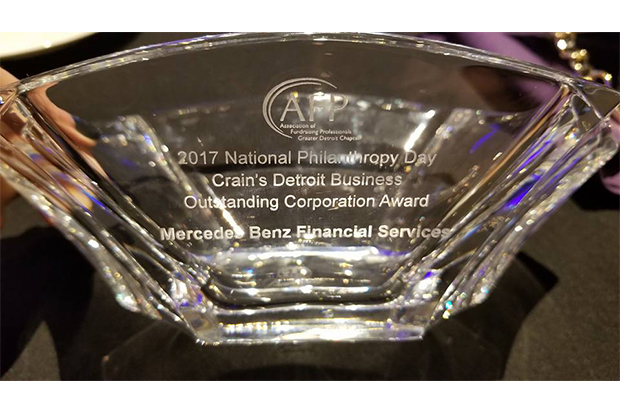 Honored to be honored for community engagement

On Nov. 9, 2017, Mercedes-Benz Financial Services was recognized for its decades-long history of giving and community engagement at the National Philanthropy Day Awards. The awards are presented each year by the greater Detroit chapter of the Association of Fundraising Professionals to honor the region's most accomplished volunteers, donors and funders.

The honor received, the “Outstanding Corporation Award,” is presented to a corporation or its corporate foundation for demonstrating outstanding commitment through financial support and encouragement and motivation of others to take leadership roles in philanthropy and community involvement.

The company was nominated for the award by long-time partner Cranbrook Academy of Art, with support from several other non-profit partners—Beyond Basics, Forgotten Harvest, Sphinx Organization and City Year Detroit—for its many contributions to their initiatives.

As one of the company’s core values, social responsibility is an integral part of Mercedes-Benz Financial Services’ identity and how it conducts business. There are a wide variety of social and community needs, and the company views them through the prism of its four focus areas: arts and culture; community enhancement; diversity; and inclusion and education.

While the corporation supports a broad range of organizations financially, one of its hallmarks is the active volunteerism it promotes.

A signature activity is “Week of Caring” which has been held annually since 2013. The initiative brings team members in each location together to support dozens of nonprofit organizations in the communities. Its fifth annual Week of Caring in 2017 involved nearly 2,000 volunteers donating more than 7,000 hours to 32 community partners.

In Detroit, local volunteers worked with several of the organizations that sponsored its NPDA application, including Forgotten Harvest, where more than 100 volunteers helped harvest crops.

But its volunteer activities don’t begin and end with one concentrated week. The company and its employees give back to the community in a number of other ways, ranging from fundraisers, collection drives and blood drives to giving of their time and talents as board members for local non-profits. As the 2017 hurricane season was especially intense, in addition to several timely, monetary donations the company made, employees self-organized additional donation drives.

More efforts are taking place through another cherished initiative, the Individual Volunteer Day, where employees are granted a day of paid leave for use toward additional community service activities. Recently for example, Kathy Daniels, a benefits representative, worked with Life Remodeled, a Detroit-based nonprofit that invests approximately $5 million in cash, labor and materials into one Detroit neighborhood each year. She and her husband, another Mercedes-Benz Financial Services employee, helped clear growth and debris from abandoned homes near Detroit’s Durfee Center to make the neighborhood safer and tidier for nearby residents. In 2016, Mercedes-Benz Financial Services employees put in 1,100 hours volunteering during their paid volunteer day.

“Mercedes-Benz Financial Services is committed to communities that look clean and full of life, that are filled with the sounds of businesses flourishing and children learning and laughing, and that are safe, inspired and enthusiastic to celebrate art and culture diversity,” said Dominic DiMarco of Cranbrook Academy of the Arts in the awards nomination. “The company’s philanthropic generosity to its non-profit partners is without peer.”

The payoff shines through in an improved community, but in another way, as well. The emphasis on community involvement is just one of the key reasons that nine out of 10 employees say that Mercedes-Benz Financial Services is a Great Place to Work®.